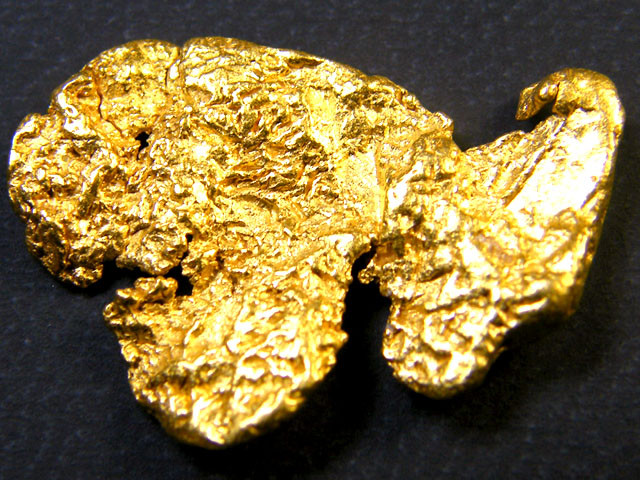 Wednesday March 24th 1897 – Braidwood Times
A Big Nugget from Little River (Mongarlowe)
“On Monday morning last a miner named John Williams, who has been prospecting at Little River for some twelve months back, brought into town a nugget of gold of a size which is not dropped across every day. It was purchased by the City Bank and found to contain 47ozs 20wts 5 grs. It was put in a glass case and exhibited on the bank counter, and half the town went to the bank during the morning to look at it. The nugget is oval shaped about the size of a turkey’s egg, averaging about an inch in thickness, and attached to it when found was a smaller piece of similar shape, the neck by which it was joined to the “big fellow” being severed by the pick in digging it out. It is a bright coloured gold with scarcely a particle of quartz intermixed with it, and looks just as if it had been poured out of a crucible into the red clay in which it was imbedded, fine particles of which still adhere to it, or rather the clayey discolorations.
Williams, as is the case with most diggers when they “strike a patch,” is not at all communicative when questioned as to where it was got. All that he will let anyone know is that it came from Little River— for the rest, that it is there, in the bank, never mind the bank it was got from. Williams says it was lying some 4ft below the surface. Williams, we are informed by those who know him since he came to Mongarlowe, is an old digger, and has put in over eighteen months prospecting by himself in that locality, during which time he has had very little for his trouble, earning at the best no more than his tucker and sometimes not getting more than enough to find him in tobacco.
It is generally believed that the nugget was unearthed at Broad Gully, about a mile from Sergeant’s Point, where so many coarse lumps of gold have been found in the past, and it may be interesting on the occasion of this last find to refer to some of those of former years. The late Mr. Aaron Anson, who owned a farm at Little River many years ago and did a little gold digging like so many other of the pioneers of the district, in the early days of the gold fields, struck a large lump of the precious metal which was said in those days to have realised close upon £200, when the price was very low. Mr. Donald Dawson, a member of an old settler’s family in the neighbourhood, with one of the Cargills, got a fine patch of coarse gold, described by some of the old hands as a nail-can full, from the St. Vincent Reef at the head of Settler’s Flat, just over the ridge from Broad Gully. Jack Oakes, 20 years since, stumbled over a lump of nearly solid gold weighing 70ozs which was lying on the surface after being left bare by a heavy fall of rain. Ted Mackay, Tom Peters, and three others in the Homeward Bound reef close to Broad Gully had a splendid haul about the same time, which gave them £1000 a man. The gold was hanging together in the reef like a bunch of grapes and would probable not have been found but for the accident of its falling down upon one of them in a drive and nearly smashing his head. Tom Peters, who at present has a dam and race at the head of Settler’s Flat, found a nugget 3lb. weight in some old headings. A much larger one than this was found by a Chinaman about the same time.
Coming down to later times an old digger named Loftus, who lives in the neighbourhood and was the first resident at Settler’s Flat, has got several nuggets at different periods, from 7 to 9 ozs. In weight, and no later than a fortnight since he picked up one weighing 8ozs. 12dwts. Larry Peters, 12 months back found one of 5ozs. and Jack Oakee also about the same time brought one into town for which be received something like £100. These were all from about Broad Gully and recently nuggets of 7ozs. and lesser weight have been got by Jack Hubback and others in the immediate neighbourhood of Broad Gully.
The different reefs, the Alma, Red White and Blue, Dog’s Head, Black Angel, Meridith’s and others which hive proved so rich, all clustered round Broad Gully, with the Day Dawn, a proved rich reef to the depth of 210 feet, all attest the highly auriferous nature of this locality, and some of the much-lauded gold fields elsewhere have any amount of capital flowing into them which cannot establish anything like the record of Mongarlowe, or point to such good ‘shows.'”