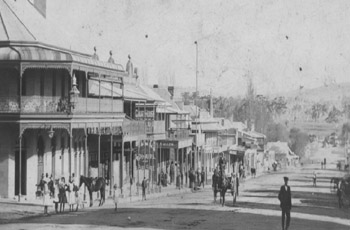 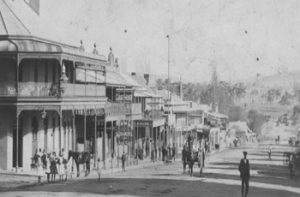 Wallace Street, ca 1800s
Braidwood is a heritage-listed town in the upper valley of the Shoalhaven River some 660 metres above sea level and surrounded by mountain ranges, including the Budawangs. The region around Braidwood was the traditional land of two aboriginal peoples – the Walbanga and the Wandandian – whose boundaries met near the junction of the Shoalhaven and Mongarlowe Rivers.
They seem to have fared better than most in their contact with Europeans, many being employed by landholders or the government but the paternalistic approach to their welfare did not prevent hundreds from dying of introduced diseases, and by the end of the 19th century their numbers were greatly diminished – “King Billy”, the last chief of the Braidwood tribe dying in Goulburn hospital in the 1870s on his way back from Randwick races!
The Braidwood area attracted the interest of early explorers (Throsby, Kearns and Hume 1821) looking for a passage to the coast, but Braidwood itself seems to have been reached only in 1822 by Kearns, Marsh and Packer. The ensuing great influx of settlers pursuing land grants and purchases in Argyle County and Lake Bathurst reached Braidwood in 1824 bringing cattle and other livestock to graze on the fertile pastures.
The first land sales were made in the early 1840s and gradually Braidwood, named after pioneer settler Dr. Thomas Braidwood Wilson, grew. The early settlers were mainly ex-army, naval officers and surgeons demobbed after the Napoleonic Wars and who had signed on for service on the colonial run. Armed with cash and promissory notes for services they were able to buy up large tracts of cheap land.
The increased demand for meat and wool in England and the availability of cheap convict labour meant they could establish themselves as landed gentry – something not possible at home. Wilson, known as the ‘Laird of Braidwood’, controlled over 12,000 acres and many tenant farmers.
By 1841 Braidwood and surrounds had a population of 1,100, of which about half were convicts, and the main industry was sheep. In 2016 the population was 1,650.
Within the town the Courthouse (1837), Doncaster Inn (c.1841) and Royal Hotel (c.1845 – now the local Museum) were built and a road had been built across the ranges to the coast near Jervis Bay. Known as the Wool Road it carried the clip from Braidwood and far beyond for loading onto ships bound for England.
In 1851 gold fever hit Australia and discovery of alluvial gold in the Araluen Valley led to an influx of thousands of fossickers. Other finds followed at Majors Creek, Jembaicumbene and Mongarlowe River and within ten years there were estimated to be up to 8,000 people in the Braidwood area and its nearby villages, and over 10,000 by 1871.
Gold also attracted bushrangers, the notorious Clarke Brothers being the local variant, although Ben Hall and his gang paid a number of visits to attempt to intercept the gold coaches on their way to Goulburn and Sydney.
For two decades Braidwood prospered, but the easy alluvial gold soon ran out and the population dwindled rapidly. There was still gold to be had but it required large amounts of capital and sophisticated hydraulic engineering works to extract. Industrial gold mining ensured Braidwood’s prosperity up until the 1910s, although the depression of the 1890s effectively put a halt to the town’s continued growth.
By the early 20th century Braidwood was a busy regional centre, with shops, newspapers, hotels, schools, churches, tradesmen and craftsmen catering to the surrounding area.
Braidwood was declared a municipality in 1892 and the region became Tallaganda Shire in 1906. By the 1920s it was already regarded as a ‘sleepy hollow’. Braidwood citizens recognised the asset of their carefully preserved heritage and today it is unique in that the entire precinct of the town is considered a national treasure for its unspoilt beauty, and the grandeur and heritage of its public and private buildings.