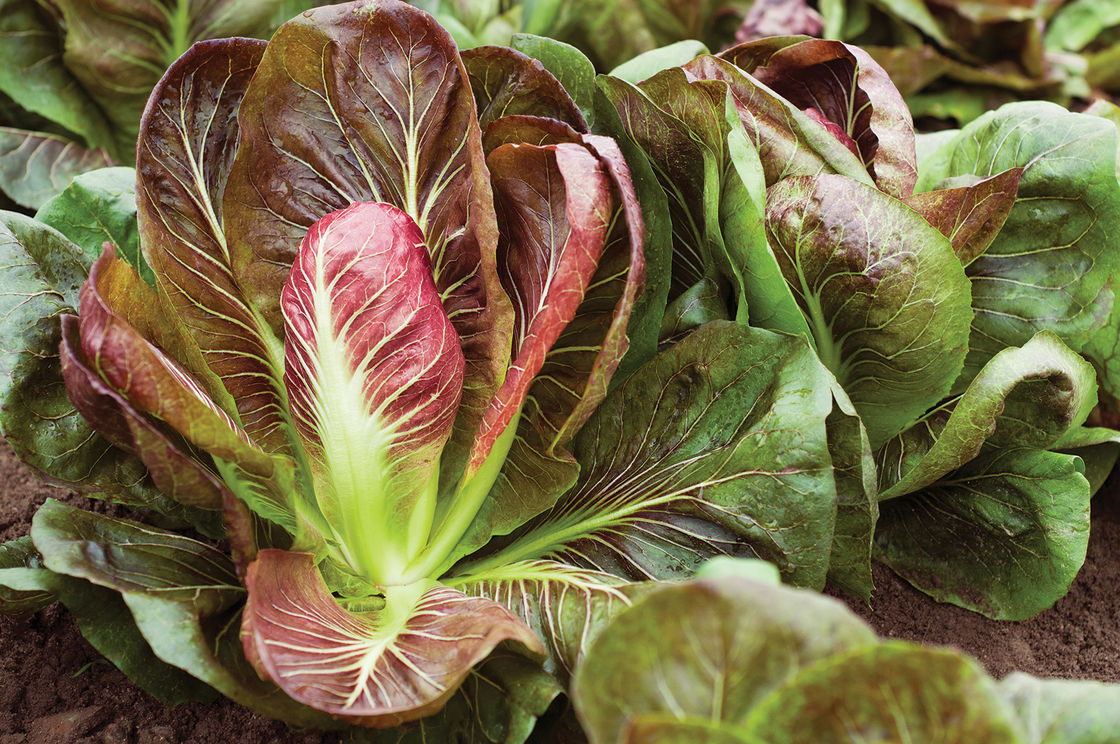 August, September and October are our months of preparing and waiting, with almost nothing to show for it. The vegetable plots are getting their final cultivation with our biodynamic cow manure and soil additions worked in with the broad fork and Grillo. We have to wait for the last frost, which can be Melbourne Cup Day in Braidwood, before we start sowing in earnest.

However, next year there will be colour and productivity in some beds. There will be rows of red leaves bursting up as though they had been fired like rockets from way below the ground and exploded out into the light. They will come from the radicchio ‘Red Treviso’ which we will sow in late spring through midsummer. We will start the harvest in April and then all winter and into spring it will produce crimson, slightly bitter leaves that perfectly compliment the rather blander tastes and textures of the various winter lettuces we grow.

We will be sowing over 25 varieties of radicchio, chicory, endive and witloof. A bitter selection with something for everyone. We’ll be trialling varieties that can be used both in salads during the summer and for cooking in winter.

Radicchio grows in two stages, developing a strong root and producing red and green leaves that are very good in salads, especially when they are young. In winter these leaves change form: some varieties die right back and then re-grow, and some change colour, turning bright red in response to the cold and to lower light levels. Some radicchios have a kind of self-blanching mechanism, where the outer leaves protect the inner ones from light, which results in these being paler and less bitter.

Bitterness is a defining feature of these vegetables. It adds depth to the otherwise almost universal sweetness of leaf vegetables. Also, many radicchios develop strong leaf stems that are too tough to be eaten raw, but cook very well. The outside leaves must be peeled away so that the healthy leaves below can get some light. This is especially true of radicchios such as ‘Palla Rossa’ or ‘Cesare’ or ‘Red Verona’, all of which have a dome-shaped top. We have to throw a lot of outer leaves on to the compost pile to get the harvestable radicchio heads.

We’ll grow chicories such as ‘Catalogna Brindisina’ or puntarelle, primarily for the stalks that it grows the spring after planting, or, for its stems and leaves, as ‘Catalogna a Foglia Fastagliata’ and ‘Barba di Cappucciono’. These look  like a dandelion when growing, with large, deeply serrated leaves.

Also a diminutive chicory called Minutina or ‘Erba Stella’, which at first looks like grass or flat chives as it grows throughout the summer, but in autumn and winter it develops the typical chicory heart and a number of shaggy, rather rough-textured leaves. You can cut or dig up the entire plant and cook it whole.

‘Grumolo Verde’ is the toughest of all chicories, surviving any weather and growing almost perennially. It also has two leaf forms, starting out loose-leafed and then slowly developing round, almost spiralled heads.

We’ll be having a go at’Witloof’ chicory too for its blanched chicons, which are eaten raw as part of a winter salad. ‘Witloof’ chicory was ‘discovered’ when a Belgian farmer threw some wild chicory roots into a stable. In this warm and dark environment, it grew the characteristic blanched leaves.

To get the white chicons,we will grow the chicory all summer so that it establishes a strong root system, then cut off the head (which looks like a shaggy lettuce) so that the plant is flush with the soil. If the weather is mild, the chicory will be blanched by placing a flowerpot over it and putting straw round that, to stop it from freezing. The more traditional method is to dig up a few roots at a time, trim them and then pot them up in peat or sand, invert a pot over the top to block out any light. We will put them in a warm, dark place so new white leaves grow back from the root. As with all blanched leaves or stems, they are less bitter than those exposed to the light. When they are of sufficient size to cut, the root is discarded.

So here’s to a bitter harvest this time next year!